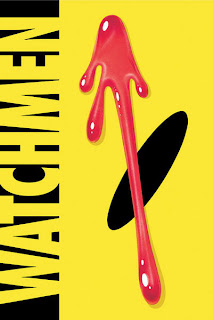 I am the one angry little comic book fanboy with a problem with the Watchmen movie.

My problem with this movie is simple: it exists.

Yes, the very fact that Watchmen got made into a movie is a travesty to me. And I love comic book movies. You can ask any of my friends that have known me for any number of years, there isn't a comic book movie since the original Batman I've turned my nose up at. I'm looking forward to seeing X-Men Origins: Wolverine quite a bit as well as Astro Boy, Red Sonja, Hack/Slash, Whiteout, Kick Ass, Preacher (if it comes out), and even Dragonball Evolution. All on my schedule of movies that I'm going to watch this year. But Watchmen has never been there.

My reasoning lies in this: of all the comics books created through history, there are only a few that stand out as surpassing the "simplistic nature" of the medium. Watchmen stands among these few. While the rest will never be anything more than what they are because of the wishes of their creators, Watchmen cannot. It's creator has no control over his work, and because of that, the highest bidder can do what they will with it. That indignity alone should be enough for me, but that's nearly a moot point, as I'm also guilty in watching the other films made from Alan Moore's works.

Watchmen is a credit to comic books. It's the equivalent of Citizen Kane, Sgt. Pepper's, or Starry Night to comic books. How many people in their respective communities would like to see them redo either of those pieces of art, or better yet, replace them with other versions? Imagine Uwe Boll doing Citizen Kane over, and his version becomes the only one you can see. Nickleback doing Sgt. Pepper's? I'm not saying that Watchmen is the Bible, but it deserves the same respect that you would give any of those pieces of art. But it doesn't get that respect, and why? Because it's a comic book. One of Time's 100 greatest novels, and winner of a Hugo award, but still a comic book at the end of the day.

You might say "What are you talking about crazy? It's an honor for a book to be made into a movie!" That's not my point, but you could say that. However, that's also contingent on the quality of the movie. This Watchmen looks like I expected it to: a summer special effects action blockbuster. What's reaching the world on a mass scale, isn't an academy award winning film, but a summer blockbuster. A good movie. I can't in good conscience be satisfied with that. I may be premature in saying all that, and if Watchmen becomes the highest grossing film next to Dark Knight, or even gets a nod from the Academy, I'll see it right away. It doesn't look like that right now though.

The reason why I'm so stringent in my stance against the Watchmen movie is of course personal. When I read Watchmen, I was on a comic high reading Vertigo series, and all of the superhero stories recommended to me by comic book fans. I picked up Watchmen because I had just read Top 10 volume 1, and heard that Watchmen was Alan Moore's best; and when I first started reading it, I got bored. I couldn't see what was so good about it, it was just a ton of talking. Then it dawned on me that I was just looking for people beating each other up, or some violence of some kind, like in every other book I was just reading. I felt small and stupid, and suddenly I challenged myself to start over again from the beginning. I finished Watchmen in two days because I had to sleep, I'd read too many comic before it before I started.

After I finished it, I felt like my world got a little bigger. I realized that comics didn't all have to be the same, that there could be a much deeper communication placed in them. It simply never occurred to me that a comic book could be another way, and it took me reading Watchmen to realize that. I promptly started re-reading the other comics looking for such a thing, but couldn't find it. There will never be another Watchmen in comic book history, and now what was it's relevance is come and gone.

I say this, because I had a conversation about my feelings on this topic, with a friend of mine. During it's course he said something I felt was important, but I can only paraphrase:

"Let's face it most comics are shit. And no one cares about the socially inept losers who read them."

While I disagree with a great majority of the statement, I do see his point, because I saw it. I looked for other comics that emulated Watchmen and only found a handful. The rest I simply like because I like comics. The rest of the world sees what my friend sees, and he proves my point for me.

No person without an interest in comic books would read Watchmen seriously, unless prompted by a credible source because they know comic books are for the most part juvenile. You turn it into a movie, and everyone can enjoy it right? But if all the best comic books get made into movies, why would you want to read the comic anyway? On top of that, what do you associate being better: the comic? Or the movie?

Spider-Man, X-Men, Batman, sure they've all had great stories for their series and characters, you've seen quite a few of them featured in their movies. But can anyone tell me the name of any story of any of those comic book characters, that people have considered to be more than just a superhero/comic book story?

There. I've said my piece. My fight's already been lost so I'll probably see the movie sooner than later. What I'll have to wait for, is to see if I have to eat my words ^^
Posted by B. R. at 11:03 PM