Review: Wolverine and the X-Men 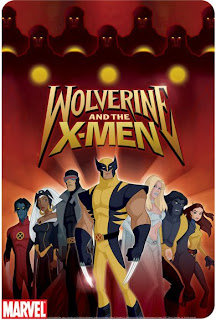 So I haven't watched any movies of note lately (not to say I haven't seen any. I saw The Class, and Two Lovers this past week, but they both weren't very good so I opted not to speak on them), and since my regular media consumption is limited to comics, BBC news, and re-runs of Solitary. Needless to say I was bored, but then I'd forgotten that I had 3 episodes left of the 1st season of Wolverine of the X-Men.

I've recently found my inner elitist, and have been touting him all over town, so I'll start by saying that cartoon's today suck. I'll give credit to some of the funny ones, but that's not really my forte. I'm an Optimus Prime kind of guy. Most of my affinities lie in the guise of my childhood heroes; apart from a few of the re-launching, or re showing of all those old properties, kids these days don't have anything cool to watch (or play with for that matter, action figures blow these days too). Enter Wolverine and the X-Men, the fourth animated version of the X-Men since Pryde of the X-Men in the 80's.

The setup is that the X-Men have broken up after the founder Professor Xavier disappears, along with Jean Grey. Cyclops goes into depression (LOL), and the team pretty much disbands afterwards. Wolverine, among the diaspora, realizes that human/mutant relations are intensifying with the implementation of the mutant registration program. With no X-Men, mutants are pretty much sitting ducks for humans, and so he takes it upon himself to get the X-Men back together and eventually ends up leading them.

Now anyone who has any knowledge of the character Wolverine, knows full well that this sounds ridiculous. But not only do they make Wolverine into a believable leader without breaking his character, but they weave a really awesome storyline; one which involves all the classic stuff from the old show and comics, as well as making it accessible and fun for anyone else. It's just my opinion, but I know what I like when I see it, and I like this show.

I'm a firm believer in the fact that American cartoon's died after the mid 90's. Heck, maybe even before. Most of my affinities lie in the region of Japan, mostly because my favorite cartoons through the 80's and 90's are Japanese. Only a select few American cartoons did I really enjoy, one of which was X-Men. It's definitely of it's time, but back then, that show was aces. Not alot of cartoons since can emulate or capture the way that show worked, but this show does so surprisingly. If I were a kid again, I'd be all about it. Plus I could look forward to the inevitable action figure line and subsequent video game. At least if the marketers work it right ^^
Posted by B. R. at 4:31 PM