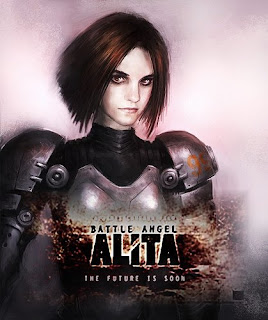 At the moment I'm feeling a bit nostalgic, if not spacier than usual, so I've decided to take a little time out to give you a little insight into a piece of media that I value and the history I have with it. Tonight's foray is into Yukito Kishiro's masterwork: Battle Angel Alita (or Gunnm as it's called in Japan).

When I was a kid, I couldn't get enough of Anime. Even when I was a child, I didn't know that the cartoons I most enjoyed watching were from any county in particular, I just knew if they looked a certain way that I was automatically going to like it way more than anything else on at the time. When I turned 10, I happened to catch an Anime festival on the burgeoning Cartoon Network.

It rocked my world.

I watched the entirety of Vampire Hunter D before my aunt and uncle caught me, and put a movie or something on to stop me. After I found out that the cartoons I liked had a different name than cartoons, I went on a rampage looking for anything that bore the golden word. When I was about 13 or so, I was already in full swing; graduating from feature film Anime, to series, which really hurt the wallet back then. I scoured the internet for info on series that I'd heard of, and then stumbled upon the source material for most of the work, which was manga.

To be honest, I don't know how I came upon Alita, as manga was completely foreign material to me. I didn't even like comics that much back then, so I had no idea what I was getting into. All I know is that I read about Battle Angel, and just knew if I was going to start reading Manga, that had to be the one. So, begging my Dad (incessantly no doubt), I got him to order it for me, and as soon as I got through the first 10 pages, my horizons were broadened.

Yukito's story seems childishly simple, barely the plot of a good kung-fu flick with a twist of sci-fi. But it's beginnings are extremely deceptive, as the story and plot truly draw you into Alita's world and story.

Daiuske Ido, a cybernetic doctor, goes looking for spare parts in a junkyard, and finds the damaged frame of a female cyborg. Damaged, and yet still functional. Taking it upon himself to restore it, he succeeds, but the cyborg suffers from complete amnesia. Deciding to give her a new life with him, he names her Alita (after a dead cat), and working as a bounty hunter to earn extra money to build her a body (he was already a hunter, but starts doing it more for Alita's sake). After her body is built, Alita takes it upon herself to help Ido in his endeavours, and finds that she seems to be a natural master of a powerful martial art known as Panzer Kunzt. From there, she embarks on a journey of self discovery, of who she once was, and who she may yet be.

I get all of this from maybe half the pages in the 1st volume.

Oh yeah, and I'm 13 and very impressionable at the time.

Needless to say, because of such Alita's story has always held a special place for me, in my pantheon of creations to aspire to. I mean it was my first Manga, and that good. It's actually a highly underrated work, as not many people seem to pay it attention. The image above however, is from James Cameron's new production, as he's planning for a 2010 film based on the first 3 chapters of Alita. There aren't that many things that you can hope to come true in your lifetime; I mean we live in the new millennium, and there are no flying cars, spaceships, or trips to Mars. If I were born in the 50's, I'd be pissed.

Normally, had Alita even been selected to become a film, chances are Uwe Boll would have been the one to direct it. Not only will Battle Angel be seen by millions, but James Cameron himself will be the one to bring her to the big screen. I've known about this for awhile now, but the fact remains: This couldn't be any better. Therefore, I'll end with a plug: go read Battle Angel Alita before the movie comes out ^^